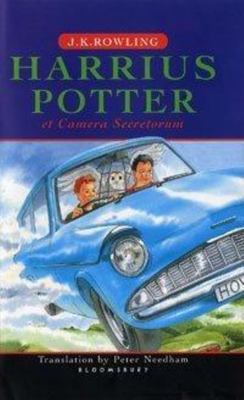 Harry Potter is a wizard. He is in his second year at Hogwarts School of Witchcraft and Wizardry. Little does he know that this year will be just as eventful as the last ...The second in the Harry Potter series to be translated into Latin for the first time, this follows in the steps of other great children's classics. The huge task of translating into Latin (most translations are done from Latin) has been undertaken by Peter Needham, who taught Latin at Eton for over 30 years. James Morwood, of Oxford University, has said of the translation of "Harry Potter and the Philosopher's Stone": "The translation is great stuff. It is accurate and fluent, but it is much more than that. It has been carried off with wit, inventiveness, sensitivity and panache. I find it impossible to think of its being better done."

The bestselling children's book now available in Latin - in the tradition of great children's classics, including Winnie the Pooh and Paddington BearOf huge interest to all those studying Latin whether at school or at higher levelThe perfect gift for the person who has everything!

J.K. Rowling lives in Edinburgh with her family. Harry Potter and the Philosopher's Stone was her first novel. The Harry Potter novels have won many prizes and have consistently been on the bestseller lists. They have now sold over 320 million copies world wide. Originally published as an author for children and still primarily so, J.K. Rowling has generated huge popular appeal for her books in an unprecedented fashion. J.K. Rowling was the first children's author to be voted the BA Author of the Year, and also to win the British Book Awards Author of the Year. Major films have now been made of the first four books in the series. The translator, Peter Needham, taught Classics at Eton for over 30 years. He has also translated Paddington Bear into Latin, Ursus Nomine Paddington. Peter Needham lives in Slough.